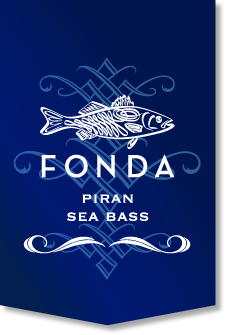 Fonda food is aimed at people who understand the meaning of healthy nutrition in the development of physical and intellectual capacities and who are dedicated to improving their own life as well as the lives of their loved ones. The right choice of food is an important building block for a healthy life.
Fish and health

It has long been known that fish are a healthy and quality food. Despite the fact that fish are a simple, easily digestible and tasty food, fish meat probably contains more healthy ingredients than any other foodstuff. They are rich in protein, essential fatty acids (omega-3), vitamins and minerals.
A diet that includes fish has a favourable effect on: the complete development of the human organism, especially the brain both before birth and during the period of growth, increased psychophysical capabilities of adults and slow down of the ageing process.

Scientific studies have proven that a great deal of these favourable effects can be attributed to the omega-3 essential fatty acids which are found especially in fish fat. Fish meat is also distinguished by its high biological value; its benefits as opposed to red meat also include easier digestion which is why fish can also be eaten by patients and are a constituent part of dietary nutrition. Due to the obvious benefits of fish, experts recommend consuming them at least twice a week.

Who can benefit most from PIRAN SEA BASS:
- pregnant women and nursing mothers
- children and adolescents
- athletes and other physically active people
- people recovering from injuries
- people experiencing increased psychological stress
- people with a reduced immune system or other health threats
- cancer patients
- cardiovascular patients
- people looking to slow down the ageing process

The freshness of fish

We specifically emphasise the importance of fresh fish, as the period between the catch and preparation in your kitchen is of critical importance. The location of the fish farm in the Piran Bay enables the fish to arrive to any part of Slovenia, southern part of Austria and north-western parts of Italy from the sea in only a few hours. The Fonda.si, d. o. o. company guarantees that the sea bass delivered to your home are indeed fresh. This is an essential condition for preserving the described characteristics of fish meat. Just as an example: the "fresh" fish you buy at a fish market or eat at a restaurant, which are on average between three and fourteen days old, have not only lost the majority of their healthy ingredients, but have also acquired harmful ones.

The PIRAN SEA BASS has an important advantage over wild free-living fish. From birth to catch, they live in supervised conditions. Their food does not contain any harmful supplements. Thus, for example the amount of mercury in the meat of PIRAN SEA BASS can be up to 15 times lower in comparison with wild sea bass and up to 100 times lower than the legally prescribed limit.

Food for the brain

Folk wisdom has always claimed that fish was good for the brain; however, the many superstitions surrounding folk wisdom are to blame for the many jokes about it. Today it is scientifically proven that omega-3 polyunsaturated fatty acids, which are most abundant in fish, are essential for the development of the human brain already before birth. Already during the development of an unborn baby, in the last three months of pregnancy, Docosahexaenoic acid (DHA), one of the saturated fatty acids which we can also find in fish oil, begins to accumulate in the brain and nervous system of the foetus.
It is precisely DHA which proved to be a key component in the development of the brain tissue and growth of the nervous system and retina. Prior to birth, children receive all required DHA from their mother and following birth, this substance is received through nursing. The more fish the mother consumes, the greater the quantity of DHA received by her child. Scientific studies have also shown that the brains of children not nursed by their mothers contain a lower quantity of DHA than their nursing counterparts.
Very resounding is the Scottish study in which they studied the effects of consuming foods with high amounts of DHA in four month old babies. Children who consumed these omega-3 fatty acids were more successful than their contemporaries in resolving problems and additionally they, in comparison with their contemporaries, displayed similar results upon renewed assessment at the age of six. The study showed that children with higher amounts of DHA in their food showed a greater capacity of resolving problems and possessed improved skills in making decisions earlier on.
Research done on children with behavioural and learning problems also showed a connection between omega-3 fatty acids and brain functioning. Based on results, they assessed that a deficiency in required amounts of fatty acids caused an unsatisfactory transmission of messages within the brain.

Favourable effects of fish on...

Diabetes
It is a well-known fact that eating fish can decrease the risk of developing diabetes by 50%.

Asthma
Studies performed at the University of Sydney have shown that children who regularly eat fish rich in omega-3 polyunsaturated fatty acids are four times less likely to develop asthma than children who rarely eat fish.

Depression
Numerous studies have shown a low level of omega-3 polyunsaturated fatty acids in people suffering from depression. The effects of the intake of fish oil by a group of depressed patients with suicidal tendencies were researched in one of these studies. After four months, the state of the patients ingesting fish oil had improved so much that the study was terminated because it would have been unethical to continue to deny the benefits of fish oil to the patient control group which had up to then received doses of olive oil.

Heart disease
Evidence exists today that omega-3 polyunsaturated fatty acids can protect against heart attacks. It has been proven that the intake of two meals a week consisting of fatty fish or a daily intake of food supplements containing fish oil lowers the possibility of early death due to a heart attack.

Cancer
There is a lot of evidence that a diet containing a high quantity of omega-3 polyunsaturated fatty acids can protect against the development of breast and prostate cancer or contain the growth of tumours which may arise. Laboratory studies performed on several types of cancers, including cancer of the large intestines have shown indications that omega-3 polyunsaturated fatty acids encourage the dying of cancerous cells.