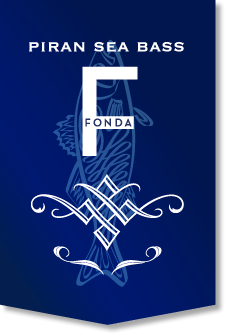 The sea bass, known to experts as the green-grey knight of the sea, is one of the most elegant and highly valued sea fish. Its meat is white, firm and delicious, making fresh sea bass a real culinary treat.

The sea bass (Dicentrarchus labrax) is a natural predator that feeds mainly on smaller fish, as well as on crabs and small invertebrates. It has a preference for brackish water, so it can often be found near submarine springs of fresh water and river mouths. The Piran Bay is an ideal home for the sea bass. It tends to travel in small schools of just 2 to 3 fish. The sea bass is a very curious fish, making it a frequent target for underwater fishers. It spawns from January to March.

The sea bass has a spindle-shaped body covered in small scales and only slightly raised at the back of the head. There is a rear-facing spine in the middle of its gill cover. The first dorsal fin is fan-shaped with nine spiny fin bones, while the second dorsal fin is softer with the exception of the first, spiny fin bone. The tail fin is forked. The anal fin has a groove and the two pelvic fins have a single spine each. The back is a metallic grey, the sides somewhat lighter, mostly a silvery grey colour with shades of brown or green. The bottom of the body is a silvery white colour and there is a dark spot on the gill cover just above the spine. Young sea bass are covered in small black spots. The sea bass can grow up to 1 m in size and over 10 kg in weight.

Bred in fish farms all over the world, the sea bass is a species of considerable economic importance. It is farmed in pools on land as well as in floating cages in the middle of the sea. Farmed sea bass live in highly controlled conditions, much more so than free-living fish, which means that the meat of farmed sea bass often contains a significantly lower amount of pollutants. Another advantage is that each fish can be traced from the fish farm to the buyer.

In nature as well as on fish farms, sea bass grow very slowly; depending on the fish farm, it can take from 2 to 5 years for sea bass to reach an average weight of 300 to 400 g. Commercial sizes of farmed sea bass range from 200 g to 3 kg and more.