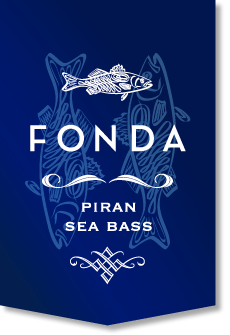 The Fonda fish farm lies in the Piran Bay at the southern most point of the Slovenian sea – 45 degrees 29’12” north and 13 degrees 34'50'' east. To the southeast lies the coast of the Savudrian Cape and to the south and east, the coast of the Sečovlje salt pans. This part of the sea is distinguished by the clean and deep water and a strong sea current. Thus it is quite understandable that this is the only region of the Slovenian sea where free-living fish can be found in abundance

We decided to breed the best farmed fish in the world.

We began with the careful selection of young fish spawn. We raise them in free floating meshed cages in open water in the middle of the fish reserve. The regular replacement of fresh sea water, continuous movement, characteristic local climate and lower salt content of the sea in this part of the Piran Bay favourably influence the quality and robustness of the fish meat. The fish are fed manually using only the highest quality (and most expensive) food on the market originating exclusively from sea animals and plants. All the aforementioned enable the PIRAN SEA BASS to be a superior fish – in accordance with our aims and expectations.

The excellent natural conditions alongside our fish farm are also ideal for raising mussels, which have been bred in this part of the Piran Bay for over 30 years. Our mussels are farmed on ropes that float freely in the sea, attached to buoys.

The location of the fish farm in the Piran Bay enables the fish and mussels to arrive from the sea to any part of Slovenia, southern part of Austria and north-western parts of Italy within only a few hours.


The fish farm is a refuge. 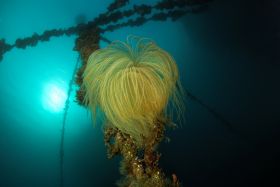 The fish farm has become a refuge for numerous fish and other marine organisms. We have encountered over thirty species of fish that live within the area of the fish farm, feeding on food which falls out of the fish breeding cages.

While small fish hide among the mussel farms and meshes, larger fish also feed and spawn here. Numerous animals, from tunicate to various marine worms, attach themselves on the anchoring points, on the ropes with which the cages are affixed to the floor and in all other underwater parts of the fish farm.

The Fonda fish farm thus performs a similar function in our sea to other artificial underwater reefs or sunken ships, which very quickly become the centres of new life. The quantity of fish and the variegated marine life here significantly exceed those found elsewhere in this area of the Adriatic Sea.